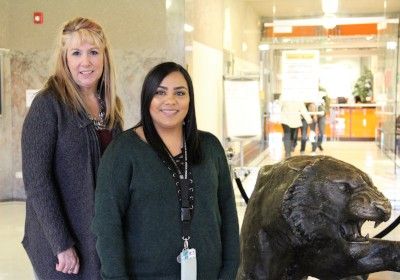 Stranded with her broken-down car in the middle of Harrison Boulevard, Makenna was completely alone with no one to ask for help. It took half an hour before someone passing by stopped to help her push her car to a nearby parking lot.

After walking to school and arriving late, Makenna shared her story with Debbie, a secretary at Ogden High. Debbie knew Makenna needed reliable transportation for her extracurricular activities and her part-time job, but she could not afford the cost of repairs and neither could her family. “She’s such a smart girl,” explained Debbie, noting how hard she works to do well in school, at work, and helping her family.

Debbie talked with Ariana, a Family and Youth Specialist at Ogden High who is part of the Ogden United Promise Neighborhood program. Together, they approached Jim Cook and Scott Eddy, who teach auto shop at the school. After the teachers agreed to repair the car, Debbie arranged for it to be towed to the school’s shop. Makenna purchased the needed timing belt, and the two teachers worked with some students to repair the car and provide some routine maintenance. As they were doing so, they noticed worn-out windshield wipers and balding tires, both safety hazards. They quickly replaced the wiper blades and ordered new tires. The beginning auto class was working on their tire unit, and students in several classes were able to help put the new tires on and get some hands-on experience.

Makenna was really grateful for help from Mr. Cook and Mr. Eddy. “They help a lot of students with their cars,” she said, adding that they also show students learn how to do basic maintenance and repairs on their own. She’s also grateful for her relationships with Debbie and Ariana in the office, who give extra support and encouragement along with their regular assistance. Debbie noted that Makenna wrote thank you notes to everyone involved, and this whole team of people is cheering her on as she gets ready to graduate, continue with schooling, and work her way to more success in her future. 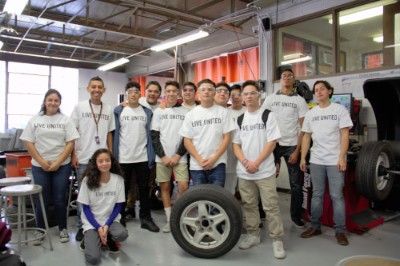 Having a team of people who each played a role in getting Makenna’s car running is the key to solving problems, both for individuals and for entire communities. The goal of Ogden United Promise Neighborhood is to bring together existing resources, build relationships, and solve problems in a way that lasts. Ariana’s role as a Family and Youth Specialist is to develop relationships with students, parents, and the school, as well as to provide them with programs and services they need. Makenna’s car problem was solved by school employees, community members, and her peers, as well as her own efforts.

This is the goal of United Way’s work in Northern Utah communities—to bring people together within their own neighborhoods to solve problems, support each other, and help every child and adult achieve success.