Ogden, Utah is located 30 miles north of Salt Lake City. At 82,749 residents and with an area of 27 square miles, Ogden is the seventh largest city in Utah. The Ogden United Promise Neighborhood (OUPN) is a designated area in central Ogden encompassing 34% of the city (27,830 residents and 5,524 household with children). The United Way of Northern Utah is leading the OUPN initiative to live out our mission of ensuring children and youth have access to great schools and strong systems of family and community support that will prepare them to attain an excellent education and successfully transition to college and career. A system of supports and interventions are being built alongside the community to accomplish this goal. 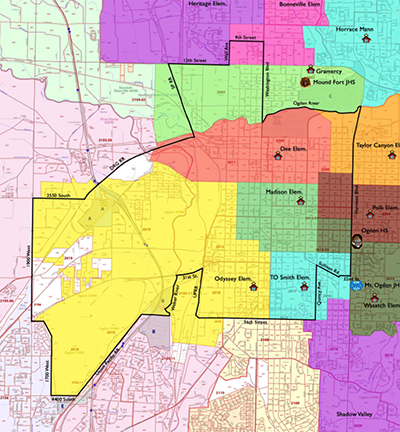 Weber County, of which Ogden is the largest city, is economically divided. On one end of the spectrum, is a world-class ski resort, Snow Basin, which hosted premiere ski events in the 2002 Winter Olympics, extravagant mountain homes and sprawling golf courses.  The lay in stark contrast to the poverty on the valley floor in Ogden. Central Ogden indeed has many great community assets, most notably its Historic 25th Street and Union Station. But most families in these neighborhoods are struggling to balance life’s many challenges. The median household income of $31,372 is only 54% of the Utah State average and 47% of children live in poverty.  Further this area has many of Ogden’s crime hot spots, high unemployment rates and historically low-performing schools.