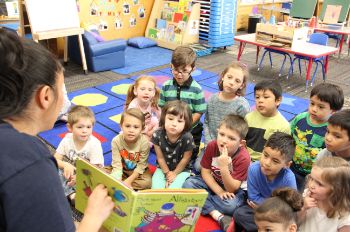 School is often the last thing on a child’s mind during summer break, but for Kanstin, it’s all he can think about. “Is it a school day today?” is a question that he has asked his grandma almost daily this summer. He is now kindergarten bound after attending the YMCA preschool at T.O Smith elementary, where he made the best of friends and found a new love for science. The impact that going to preschool can have on a child is clear to Kanstin’s grandma, Kim, who also teaches elementary students at T.O Smith.

“The younger they start, they have that love of learning, or the desire to learn,” said Kim. “It’s something that I can’t teach him at home.” 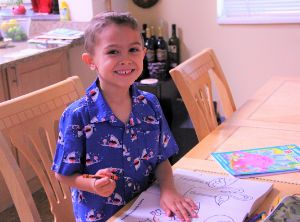 Kanstin loves science and learning about dinosaurs. At 5 years old he knows the difference between carnivores, herbivores, and loves talking to his grandma about his favorite dinosaur of all: the Indominus rex from Jurassic Park.

“Dinosaurs are thing. He tells me about them being extinct! So, I don’t know, maybe he’ll go and be a scientist,” said Kim.

Attending preschool not only improved Kanstin’s social skills, it further developed his fine motor and language skills. It also helped him adapt to the routine of going to school and instilled in him the rigor needed to be successful academically. Kim was able to track Kanstin’s learning through routine meetings and reports provided by his preschool teachers, Miss Suzy and Miss Jasmine. Each time, she saw an improvement in his skills.

“You could tell his teachers genuinely loved and cared about each of these kids, they were phenomenal,” said Kim. “I am more than happy that I chose the YMCA preschool.”

United Way is passionate about giving every child the opportunity to receive quality education. We are proud to support the YMCA preschool program at T.O Smith through funding from our Ogden United Initiative.