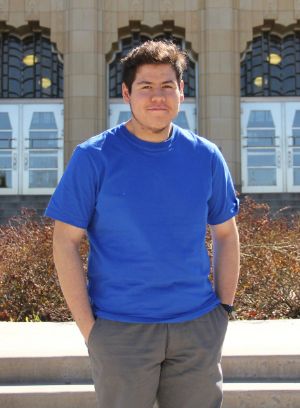 Surrounding himself with the wrong friends led David off track and put him at risk of not graduating high school. David is a senior at Ogden High School. He was excited to come to Ogden High  and make new friends. Unfortunately, David said, “I would hang out with trouble makers. Every time I got used to high school and just going to all of my classes some of my friends would tell me, ‘Oh let’s go sluff. Let’s go!’ I would go do that and from there I would sluff,” David said. David’s truancy habits led his grades to start slipping and he failed his health class.

One of his teachers, Wendy Berger, reached out to David and helped him get back on track for graduation. “She came down and told me about this club called Achievement Club. At the time I was like, nah, I don’t want to join this. It’s for students who don’t know and stuff like that. But I actually thought about it and I joined it. After I joined, it helped me out a lot. It helped me with my grades, my attendance, and it helped me make friends in the club,” David said.

David met one of United Way’s community school coordinators, Ariana, in the Achievement Club. Ariana helps students like David by checking up on them and making sure they keep up with their school work. David had missed so much school that he was extremely behind. Having Ariana provide support through the club helped David find the motivation to do his school work. “I had terrible attendance for, like, tenth grade. I even got letters in the mail saying that I need to start coming or else I’d be sent to court for not going to school. The club helped me to go to school and finish my work,” David said. 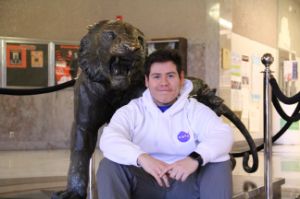 Achievement Club is a mentor program that follows these specific students from 9th through 12th grade. Typically these students have low attendance, low scores, low income, credit deficiencies, and are most likely to drop out—they are our at-risk youth. The club hosts monthly luncheons and bi-weekly homework nights to boost opportunities for improving grades and meeting goals.

David has raised his GPA to above a 3.0 and will graduate from Ogden High School this May. He has been going to Ogden-Weber Technical College to earn a welding certificate. Once he finishes his courses at Ogden-Weber Technical College, he plans to work in the welding industry to help pay for more school. David hopes to attend Weber State University in the fall, where he wants to major in criminal justice and become a police officer. Thanks to his attentive teachers, Ariana’s help, and support from his family, David will reach the milestone of graduation and is excited for what his future holds.

Congratulations to David for being part of the Class of 2019!